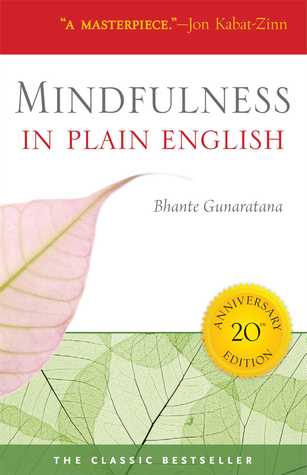 Mindfulness in Plainer English might be a more appropriate title.

TL;DR – A useful guide to the practice of Vipassana (insight) meditation.

This came under the heading “A book that will make you smarter” in my reading challenge. Also I’m trying out a selection of ‘basic’ meditation guides in an attempt to deepen my practice.

This book is presented as a step-by-step guide to the practice of Vipassana (insight) meditation – or MINDFULNESS.

It’s primary selling point is that it is written in, as the title suggests, plain English, as opposed to many of the other meditation manuals that are often steeped in jargon and difficult concepts that require quite a lot of prior knowledge and experience before it can be even remotely useful.

The book has some pretty amazing quotes on the cover that sing high praises of it’s content and author. I’m not entirely sure I agree with them.

The thing I liked most about this book was definitely the last chapter on metta (or loving friendliness / kindness). Bhante G (as the author is often known as), provides a detailed explanation of a concept of loving friendliness, it’s place within a Buddhist context, it’s purpose and then provides real-world examples of it’s use and benefits, alongside examples from Buddhist scriptural writings. It is an excellent chapter and probably my favourite bit of writing on the concept of metta that I have read so far.

One story from this chapter tells of how Bhante used to wave at a man who seemed very angry all the time whenever he went past. This man, as it turned out, would never wave back because he was recovering from a serious accident and literally couldn’t wave back. Bhante notes that had he just written this difficult man off as angry and unworthy of loving-friendliness he would have written off a good man, and indeed a friend, because of circumstances the man had no control over. I’ve made a real pigs-ear of explaining this story because I think it needs to be read in Bhante’s own words – but it is a really excellent example of why loving friendliness should be extended to everyone – even those who by appearances don’t seem to deserve it.

The rest of the book is pretty good – although I didn’t find it quite as good as others seem to have done. Don’t get me wrong, there are plenty of bits I have taken in while reading that have definitely helped my practice and I definitely recommend it as a book for any meditator to read, I just didn’t think it was ‘a masterpiece’ as the front cover would have you believe. This is probably down to the fact that the last dharma book I read was literally life changing, and this is a practice guide and not a philosophical work.

If you are serious about meditation I don’t think you would have much difficulty in understanding the instructions – although following them is quite intimidating.

I have some issues with the title. Plain English. There is no two ways about it, this book is infinitely plainer in it’s speech than the vast majority of books that I have read on the subject. That does not mean, however, that this book is jargon free. There are a lot of Pali terms flying around and a handful of high-concept words that, while mostly well explained, could be intimidating to the beginner. This book was written by a Buddhist monk after all, so it is to be expected that some Buddhist terminology is included – it’s just something people should be aware of as mindfulness tends to be thought of as a secular thing a lot these days.

I warn you now, what I’m about to point out would stop a great deal of reading this book – and I have to admit it made me feel pretty weird about the whole thing too. All I can do is say that just because I’m pointing this out doesn’t mean you should write off the whole book. Just forget this bit and move on – it’s not worth missing the whole book because of one paragraph.

“There is a point in the meditator’s career where he or she may practice special exercises to develop psychic powers…Only after the meditator has reached a very deep stage of jhana will he or she be advanced enough to work with such powers…” p.15

This quote comes from a section entitled “Misconception 4: The purpose of meditations is to become psychic”. Obviously it’s good that Bhante is making a point of saying you don’t meditate to try and become psychic, but he also pretty much

point blank says that it is a thing that can happen and that you can train to do it when you are very experienced. This is obviously going to be a bitter pill to swallow for a lot of people – and by bitter I’m talking bitter like the sour candy Homer Simpson eats at that trade show that all but turns his mouth inside out kind of bitter. If this bothers you, just move on and forget you read it.

This book definitely helped me absorb some useful tips for my meditation practice, and probably deserves a second read another time when I haven’t just finished something life-changing.

I would recommend it to anyone who meditates or plans to meditate, providing they don’t go into this book expecting a secular mindfulness guide.