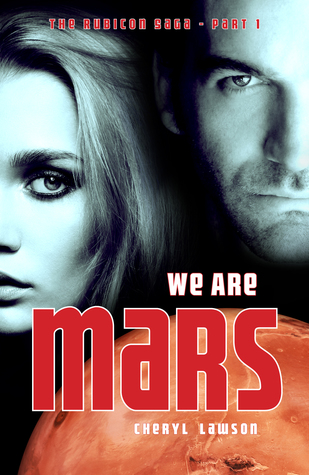 A city on mars! What could possibly go wrong…

I originally bought this book as a sort of weak thank you after Cheryl very kindly offered me some excellent advice on kicking writers block. Though I would have bought it either way, because it sounded exciting and I love a good sci-fi novel!

Rubicon was once the pinnacle of human achievement. A city on Mars with with best technology and brightest minds all in one place. But that was years ago. After the expedition failed to discover evidence of life on Mars, funding dried up and Rubicon began to stagnate.

After a biological contagion is discovered in the drinking water, Rubicon descends into chaos – and that’s only the beginning.

We Are Mars is an wonderful science-fiction thriller.

We Are Mars explores a side of space exploration that often gets neglected in the sci-fi genre. Rubicon was once a technological marvel, but it’s systems are now becoming antiquated, and the supply ships that arrive every six years are more inclined to bring branded drinks dispensers than vital mission supplies to the Red planet. Rubicon is thrown into complete disarray when the aging water filtration system fails to prevent an outbreak of an unknown toxin to the drinking water, made worse by the completely unforeseen medical problems in genetically engineered humans.

The numerous tragedies that unfold during the course of the book, provide a wonderful backdrop to the interrelationships of the books main characters. One particularly interesting relationship builds between Jaxon and Dana, who prior to the outbreak constantly butted heads as Jaxon did all he could to rebel against the authority Dana represented, and Dana tried desperately to reign Jaxon in and maintain order. But as the pair find themselves forced into an impossible situation, they find themselves showing qualities that were hidden or ignored, and their working relationship becomes strong, building throughout the book. I enjoyed the way the characters evolved as the book went on, and the gravity of their situation hit them in unique and interesting ways.

Finally, I loved the world building. Rubicon has clearly undergone a considerable level of thought, avoiding the ‘generic space city’ vibe and instead becoming a believable and fascinating location. The rules and regulations imposed upon the inhabitants are infuriating, but completely understandable given the mission parameters. It is, as the book says, more scientific experiment than living city, something that Jaxon and his cohorts find themselves desperate to change.

Each chapter focuses on one (or more) characters, and it took me some time to wrap my head around who was who. Each time the narrative switched to someone I hadn’t heard of, I got a bit confused, and then when it switched back to someone I did know, I couldn’t remember who they were – although this became easier as the book went on, and I would chalk this up to an issue with my comprehension ability than the book itself.

We Are Mars is a really fun and exciting read, that sets itself up nicely for the sequel (which I cannot wait to read). The plot and characters are excellent, and the world building is top-notch.

Twitter is an awesome place sometimes. This time it’s awesome because I managed to get We Are Mars author Cheryl Lawson (@WeAreMarsBook) to answer some questions about her work, which I’m super excited to present to you here!

1) What inspired you to write about disasters on a Martian colony?

I decided on a Mars drama because of two things: 1. The isolation of a Mars colony makes it vulnerable and 2. Mars is such a hostile place, I felt there was already a lot to work with. I’ve realized, while writing both books, that there are dozens of ways to die on Mars and it provides a lot of opportunity for an exciting and dramatic narrative.

2) If you had to pick two parts of We Are Mars you like more than any other, what would they be and why?

Firstly, the characters stories are my favourite part of the book. They are complex and the pressure of they are put under reveals unexpected traits and behaviours. Second, the ending – which is more of an opening to Storm at Dawn – is my next favourite part. It gives a clue for the coming crisis.

3) I see from twitter you have recently completed your first draft of Storm at Dawn, the second book in the Rubicon Saga. Is there anything in it that you a really excited for people to read?

Yes! The characters relationships are severely tested and the threats abound in Storm at Dawn. There’s a significant plot twist towards the end that opens the plot for the next, as yet untitled, third installment of the Rubicon Saga. It’s going to be a cracking read!

4) Finally, is there anything you’d like to tell my readers?

We Are Mars is not all about the science. It’s about the people and the character cast is richly diverse. The science sets the stage for some amazing interpersonal drama and if your readers enjoy complex, layered characters, they will love the Rubicon Saga.

Thank you so much Cheryl, for answering my questions.