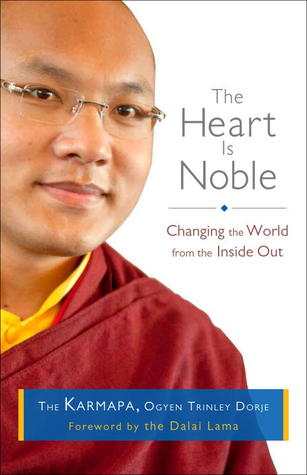 Life advice for anybody – not just Buddhists!

TL;DR – Advice and thoughts from a Buddhist monk to the rest of the world. Not just for Buddhists.

I’ve read lots of snippets from His Holiness around the internet in the course of my day-to-day ramblings, and have found those snippets to be insightful and useful to me, so I have been keen to read a book by His Holiness for some time – this just happened to be the first one I bought.

This book is intended as personal thoughts and advice from His Holiness the 17th Karmapa, to anybody who is interested. It is based in Buddhist thought – as you would no doubt expect from a Buddhist monk – but it is not just for Buddhists, it’s good advice for anybody.

The book is split into chapters covering a number of themes, ranging from Healthy Relationships to Food Justice / Vegetarianism to Gender Identity. His Holiness provides his own thoughts on a range of subjects he sees as problematic in the world and offers his own ideas as to how we all can work to combat these problems.

I found this book to be insightful, and very interesting. There is nothing dogmatic about this book – you aren’t supposed to just agree ‘because the Karmapa said so’, or even because it seems like the Buddhist thing to do. His Holiness provides his thoughts in a clear manner, and invites you to test them against your own experiences to determine their validity.

I found the chapter on vegetarianism particularly interesting. I personally find this a difficult subject because of two parts of my personality. First, I love eating meat, secondly, I believe it is ethically wrong of me to do so. I expected this chapter to make me feel worse about it – to go on and on about how terrible I am for eating meat, like so many others have done in the past. But it didn’t. What I got was a story from His Holiness about how things were in Tibet, and how they are now. We start by learning that His Holiness ate a lot of meat when he lived in Tibet – because that’s what was available. He then explains how this changed once he escaped to India. He tells us he became vegetarian after watching a documentary about the meat industry and feeling a surge of compassion for the emotions of the animals. But it wasn’t heavy handed, there was no sense that you must agree with his assessment, it was just stated plainly that this was how he felt and from that he turned to vegetarianism. His Holiness even admits that he still occasionally craves a certain kind of meat he remembers from his childhood. He then goes on to explain all sorts of things about why he thinks vegetarianism is would be a good thing for everyone to adopt, but it never feels pushy or aggressive. But it is persuasive. It has led me personally to make a move towards vegetarianism I felt poorly equipped to make before.

The whole book is like this. In a friendly, approachable style, His Holiness provides anecdotes and the occasional piece of Buddhist wisdom or storytelling to illustrate his points and reminds us constantly about the important of compassion and loving kindness.

There is nothing about the book I really disliked, but I do have to mention one thing because it may upset some readers.

Buddhism calls for universal compassion, and when I say universal I mean it. Compassion for everyone. In the last chapter we are taught how far this actually goes. It specifically mentions rapists, child abusers and murderers as people who deserve compassion. It states that we are quick to be compassionate to the victims (as indeed we should be) but that we are all too quick to withhold compassion from the perpetrators (which is true). This is hard to read – and His Holiness admits right at the start of the chapter that it is easier read than put into practice. It is a fairly simple concept to grasp, but can be quite difficult to read – especially if you have ever been the victim of something like this.

Just be aware of that.

I really enjoyed reading this book. It has been quite the treat for me to sit down every night before meditating and read a chapter of this book. I can’t wait to read some more by His Holiness, and I hope you will consider reading it, whether you are Buddhist or not.