Week 2 is over and oh boy has it been a massive, MASSIVE week.

First off, I’m improving my method of study. As I said last time, I was a bit slapdash with study, particularly with notes. I’ve since figured out how to make notes electronically (which you would think I would have thought about at some stage during the last 7 years) and I will be trying to make notes digitally instead of on paper. It might help, or it might be terrible, I won’t know until I try. I’m also keeping on top of my studying comfortably, which is good. As an added bonus, I got my study area up and running and it looks like this: 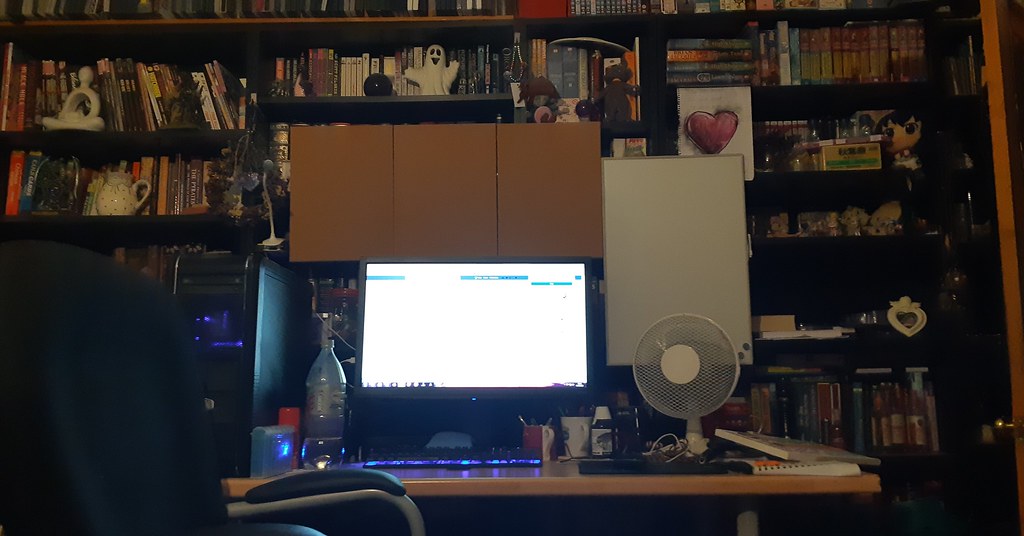 If only the computer worked properly it would be almost perfect.

These are all big things for me. It’s a level of organisation I haven’t bothered to utilise before.

I’ve also made a decision. An Access Course is, not surprisingly, pretty easy going for me, since I’ve already recently completed a degree. I’m already used to university level study so I have a big advantage compared to many of my classmates. I had a big wobble during study time the other day because the questions I was asked to complete were so painfully simple compared to what I’m used to that it made me sad. But I fought off the anxiety and reevaluated my focus. I’m going to try and pick up new study skills from this course if I can, but mainly I’m going to be trying to absorb as much of the different STEM disciplines as I can. The first course from my last degree scared me, because I didn’t like “the Arts”, I just wanted to do history as I mentioned in my first journal post (Study J(OU)rnal, Prep Week, Year 1). But I didn’t like the history course, so I fell back on things I had (surprisingly) enjoyed studying during the the first course. So I’m doing the same here. I’m going to keep my mind open to all the disciplines in case I find something I think is more interesting than computers!

Finally, an opportunity fell in my lap this week. I have been wanting to take part in the non-academic side of university life for some time, and this week an email was sent out to all members of PLEXUS, the Open University’s LGTBQIA+ society, about elections for committee members. So I’ve self-nominated for the position of Trans Officer. It’s a scary thing to do, and I’m very proud of myself for putting myself out there, even if I don’t get the spot. But still, fingers crossed.

It’s the end of my first week, and I have very mixed feelings about everything. I’ve had a difficult week mental-health wise which has obviously put a damper on just about everything, but that’s not to say I haven’t been busy.

I’ve done First Contact with my tutor for the year. Our tutorials are supposed to be done via telephone, which I am unable to do, so I was pleased to see my tutor was accommodating to that and will allow me to make contact by email. Of course, I was confident this would be the case, because so far my experience with the Open University’s accessibility procedures has been really good.

I’ve also completed my first weeks study content. This week’s work was mainly about how to be an Open University student, which as an alumni I already know, but it has encouraged me to think critically about my approach to study. Over the last 7 years, my studying has been slap-dash at best. I took probably 3 pages of notes, total, I did every weeks worth of studying in one or two big chunks and when the time came to write assignments I stressed and wrote frantically for days, without much actual planning involved. As it turns out, I actually am quite effective with a fluid learning style (one of the advantages of the OU over a brick-and-mortar uni) but I can make changes. I’ll be going out an buying a cork-board and a whiteboard and I will try and combine my existing fluid style with a little bit of planning.

Finally, I’m pleased to see some changes to the way the study materials are presented. Each section is broken down with a guide saying how long it is expected to take. There is a study recap at the end of the chapter, and included in this there is a little box listing the things you have achieved by completing the chapter! I don’t know if it’s specific to the Access course (which prepares you for university level study) or if the features are new to the OU generally, but they were a nice touch.

Tomorrow is the official start date for my new degree. The course I will be starting with is called: Y033 Science, technology and maths Access module (link to Open University).

Having just finished one OU degree (BA(Hons)) I haven’t had to do much prep to start with, since studying is pretty fresh in my mind. I have had a read through the assessment guidelines, and I may have lowballed the estimation of my abilities – it looks pretty easy, at least compared to what I’ve just done so that should be interesting. I was advised that it might be too easy, but I didn’t want to risk it in case there was some differences in study behaviour in the sciences that I wasn’t aware of.

What I have done is fished out the blog post I made, on Saturday the 11th, 2011, two weeks before my first degree started. Here it is in full:

There’s just over 2 weeks (or something like that) until the start of the course, so a blog post is in order.

I have no idea what to expect from this course, but needless to say ‘the arts’ is not my strongpoint. But if it’s required to get to the history side of things, then it shall be done.

In preparation for the course I have:

-Watced the DVD section on ‘Cleopatra’ twice, having read the question and thought about it

-Looked through the study tips but stopped when it tried to tell me how to use a computer.

-Been reading the topic forums for insights

I’m quite enjoying Dr Faustus. I’ve read through the Faustus thread on the forum but haven’t made any posts yet. I nearly did soon after the initial post was made but decided against it, unfortunately now everything I had to say seems to have been said, so lesson learned; Next time I get an opportunity, take it.

I have looked at the first assignment and am not too worried about it at the moment. The Cleopatra question I am fairly confident I can write 500 words about. The Faustus question I am less certain about, but hopefully I will be able to do it well.

It’s nice to have a view of my thoughts from before my last course. When I started that degree I had dropped out of Sixth Form, dropped out of Audio Engineering school and was feeling hopeless. I started with the OU with the intention of studying history. I was worried about the first course, AA100 The arts past and present (link to Open University) because it involved all sorts of disciplines: “art history, classical studies, English, history, philosophy, music and religious studies.” I had failed philosophy and classical studies at A-level 5 years previously and was scared to death of this. I hated English and religious studies and art, and ‘music’ involved opera which I really hated.

As it turned out, AA100 was probably the best thing that had ever happened to me until that point. It opened my eyes to so much. I moved away from this strange idea that I couldn’t do, or didn’t care about the arts. I moved away from a pure history degree, and wound up taking a Religious Studies and Philosophy degree instead!

I remember being worried about starting the course now. I had forgotten how scared I was. It was all new, and big and daunting. But I managed it, and did pretty well. Hopefully I’ll do the same this time around!

On the 6th of October I will be starting work on my next degree withe the Open University. The aim is to earn a BSc(Hons) Computing and IT within the next 8 years (part time, obviously…)

When I started my previous degree in what…2010, I made a blog post about it, with the intention of writing about how my studies were going. I would be able to look back when it’s all done and see – in my own words – how far I’ve come and what challenges I’ve faced (and hopefully beaten). Then, as it turns out, I completely forgot about it.

BUT I didn’t have a shiny website to write it on last time, and now I do, so guess what somebodies – now you’re gonna get a more-or-less weekly post about what it’s like to study with the Open University and such. Won’t that be fun!