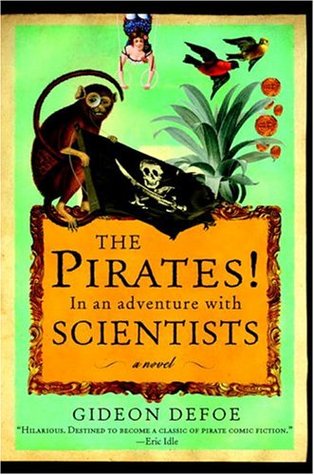 “Not since Moby-Dick… No, not since Treasure Island… Actually, not since Jonah and the Whale has there been a sea saga to rival The Pirates! In an Adventure with Scientists…” ~Goodreads

TL;DR – If you like light reading, humour and pirates, give this series a try.

“The Pirates!…” books focus on the tales of a typical pirate crew, and their fearless and ruthless captain; The Pirate Captain! With his pleasant open face, stentorian nose and luxuriant beard, the Pirate Captain leads his fearless – and only slightly inept – crew on a series of adventures throughout the globe.

The books contain a host of lovable heroes and contemptible villains, from Number 2 (the only competent pirate on the boat), to the dastardly Black Bellamy (Pirate Captains Arch Enemy / Long Standing Friend) to the cynical, realistic (and therefore much loathed) Pirate in Red.

The Stories all follow a similar format; The Pirate Captain and his crew are bobbing along through the high seas, with no particular aims or goals in mind – they just like being at sea. (Never before has a single group of people more fully embodied that fine old hymn “Yo ho; Yo ho; A pirate’s life for me”.) The crew find themselves embattled in important philosophical debates – such as the best way to cook a ham – when the Pirate Captain himself enters majestically, and settles the matter once and for all, with an observation so wise and logical, you are left wondering why you never realised it before! Then – usually due to the Pirate Captain’s boredom or generalised moping, the crew set off on a wild adventure, featuring a host of famous figures from history. For example:

The Pirates! In an Adventure with Scientists (2004) – In an attempt to score some major treasure, the Pirates attack a vessel belonging to the Bank of England, transporting oodles of gold and treasures to wherever it is the Bank of England hordes it’s treasures. Unfortunately for the the Pirate Captain, this vessel contains less gold and more brilliant naturalists, in the form of Charles Darwin. Never one to back away from a challenge, The Pirate Captain concocts a scheme to use Darwin to make a fortune in London – leading to an exciting (and utterly bizarre) mystery that only the Pirates can solve.

The Pirates! In an Adventure with Napoleon (2008) sees a depressed Pirate Captain give up the salty world of professional pirating, to follow his life-long (read: half-hour long) dream of being a bee-keeper. He buys an island – which the brochure says is ideal for bee-keeping –  from the devilish Black Bellamy, and (much to the misery of the crew) set’s sail for his new Island – Corsica. Shortly after arriving, a new resident arrives – none other the Napoleon Bonaparte, freshly exiled. The Pirate Captain and Napoleon hit it off badly – two powerful personalities on a small, raggedy island (that is useless for keeping bees on) constantly at each others throats. The pair set about proving once-and-for-all who is the better man, with hilarious results!

Why did I read them…

My first exposure to this series came from the movie adaption – The Pirates! In an Adventure with Scientists (Movie – 2012) – which remains one of my Top 5 movies of all time. After watching it a few times and looking on the ‘net, I discovered the books and bought them all. The books did not disappoint.

Why I love them…

The main (and most non-specific) reason is because I enjoyed the books so much. “The Pirates!…” books are the only series I can think of that I have read 3 or more times. I enjoyed The Pirates! In an Adventure with Scientists (2004) so much that it is my go-to book for reading when I’m in a difficult head-space and need something to soothe and give a little spark of joy. It also holds the #1 spot in my Top 5 ‘light reading’ list.

Secondly, the characters. This series has characters I can really picture and enjoy (which was definitely helped by the movie adaption). I love the Pirate Captain most of all.

The Pirate Captain stands out for me because of the way his character reacts to the world around him. He is a Pirate because he loves the idea of being a pirate. He loves the treasure, and the pirate boat and the running people through. He loves the tattoos and the shanties and the roaring. He is married to the sea and is mostly faithful to it. He loves pirating – he just isn’t very good at it.

For starters, he’s really bad with names (so relatable) so he uses descriptions instead – The Pirate in Green, The Albino Pirate, The Pirate Who Likes Kittens And Sunsets. He also doesn’t know how nautical instruments work; be it an astrolabe or an honest-to-goodness map, the Pirate Captain doesn’t know how to use it properly. But he tries his best, and goes out of his way to make it sound like he knows exactly whats going on – even, and indeed especially, when he has absolutely no clue. The Pirate Crew love him in spite – or perhaps because – of this (except the Pirate in Red who tried to undermine the Pirate Captain whenever he can).

The Pirate Captain is not a man with a plan. He prefers to get an outline (catch the white whale) and fill in the details later. This leads to a series of amusing, over-the-top and mostly ineffective schemes as part of a totally bizarre and wonderful adventure.

Things usually work themselves out in the end, in one way or another, and you never stop rooting for the magnificent Pirate Captain and his rag-tag crew of lovable idiots.

Finally, the stories themselves. The plots are silly. The writing is silly. The characters and situations and footnotes are silly – and that is fantastic. These books don’t take themselves seriously – there’s no worrying about realism or historical accuracy or on occasions, common sense. It’s just fun. Fun for adults, and fun teens, fun for all!

Most ages: Certainly fun for adults and older children. (Probably find for younger children but use your own judgement).

For readers of: Terry Pratchett, Douglas Adams etc. Similar sort of humour and writing. I personally rank my Top 3 ‘humour’ series as #1 Discworld (Pratchett), #2 The Pirates!… (Defoe), #3 The Hitchhikers Guide to the Galaxy (Adams).

The Pirates! series is equal parts funny, weird and wonderful. With situations and characters that are easy to love. They are written in a humorous and easy-to read way (complete with interesting and amusing foot-notes).

The stories are short, and sweet and funny. You really can’t ask for more.