The Ragdoll Reads Book of the Month pick for May 2018  is:

Sidney Chambers and the Shadow of Death (The Grantchester Mysteries #1) 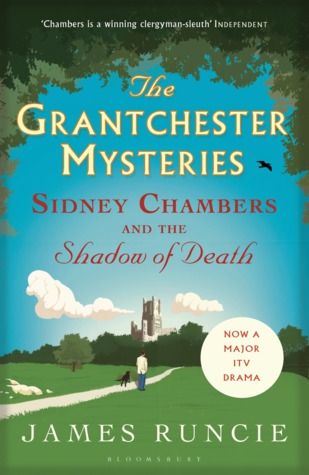 I absolutely adore the TV series Grantchester (Al Weaver’s  Leonard is totes adorbs), and I’ve been wanting to read the books basically since I saw the first episodes. Also, it conveniently falls into the “A book made into a TV show that you’ve seen but haven’t read” category of my reading challenge.

Plus I just generally enjoy the easy-read detective story genre so it just seemed like a good idea for a read.

The book focuses on “Canon Sidney Chambers”, man of God, turned amateur detective. It is set in 1950’s Grantchester and Cambridge.

There are 6 different short stories in this book, following the fairly simple theme of “Someone in Grantchester got murdered” (or kidnapped, or what-have-you), and Sidney, together with his police chum Geordie Keating are going to figure out who-dunnit.

The is not just a series of short, disconnected crime stories though (although you could probably read them that way if you chose). The ‘main story’ as it were, follows Sidney Chambers life and struggles with romance, friendship, the church, his housekeeper and his dog.

This book was a nice, easy read – it is absolutely perfect for the casual or time-poor crime fan. The stories and characters and engaging and likeable which goes a long way to making this book a low-stress read.

I like the fact that the book is broken up into 6 different parts, but has a sort of ‘main story’ as I mentioned above. A lot of writers would have been tempted to drag each of the 6 stories in this book out into a whole book so in order to try and find a balance between the crime themes and Sidney’s personal and professional life, but Runcie has done the opposite – finding a good balance by saying less. There is a lot to be said for short-and-sweet.

I enjoy the characters, mainly because I know them from the television programme, however I am particularly enjoy the character of Sidney and his relationship to the Church and Christianity in general. I personally really enjoy reading about peoples interaction with and interpretation of their personal faith, and this book has plenty of it – although I am cautious to add, not so much of it that it detracts from the other themes of the book!

Finally, I enjoy the setting – mainly because Grantchester is only a few miles away and I know most of the place names! It makes things slightly entertaining for me…

There are a handful of times where I found Runcie’s method of description a little peculiar, but not so much that I can remember exactly what bothered me, and certainly not enough to stop reading.

Also it bothers me the way the characters talk during a discussion about homosexuality, but frankly that’s my bad for reading a book set in the 50’s. Having said that, Sidney is very progressive in this regard which makes these passages easier to digest.

This book was an easy and enjoyable read. Each story was entertaining, and due to the format of short stories, the romantic subplots I usually can’t stand were engaging, but not drawn out.

The characters are lovable, although not hugely developed in many cases (again, due to the short-story format) but with 4 further books in the series, there is plenty of room for expansion. That said, the crime plots are the real selling points of this book. They are well thought out and a joy to read.

I strongly recommend this to anybody who enjoys a simple crime read – particularly those who are casual readers, are strapped for time, or struggle with longer stories.