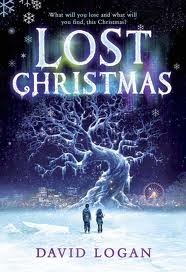 This book reads like that list of ‘really bad metaphors’ that surfaces on the net every now and then – and I LOVE it.

TL;DR – This is the story about a boy whose life falls apart on Christmas eve, and if you’re wondering why I read a book like this at the beginning of July, I should point out that apart from the references to snow – which I don’t think I have ever seen at Christmas in the UK anyway – the book could have been set at any point in the year. It’s not just a Christmas story is what I’m saying.

Goose’s parents both die in a car crash on Christmas eve, and in the following year his life has gone from happy and carefree, to casual criminal and a destroyed childhood. The only good things left in his life are his Nan and his dog. His Nan has Alzheimer’s, and he’s just lost his dog. Then this somewhat magical weirdo appears and turns things upside down.

The first thing that stuck out was on the first page – “His all-over-the-place hair was all over the place”. It’s childlike and weird, and it totally sets the tone for the rest of the book. It is written with a childlike quality that I really loved.

The next thing that stuck out was that I guessed the ending literally the second it was possible to do so. I’ve thought about it and I don’t know why it was so obvious, but it jumped out at me immediately. That said, I wasn’t disappointed to discover I knew the ending, and really enjoyed reading it.

The story is entertaining, the writing is funny, and the plot is quite clever, if a little cliche. It’s just a nice, easy read.

I can’t abide Christmas books – which is probably why I liked this one. If it wasn’t for a title and the occasional mention it could be just winter or any other cold place (that also happened to be called Manchester).

I recommend this one to anybody who likes a good story with a very casual writing style.