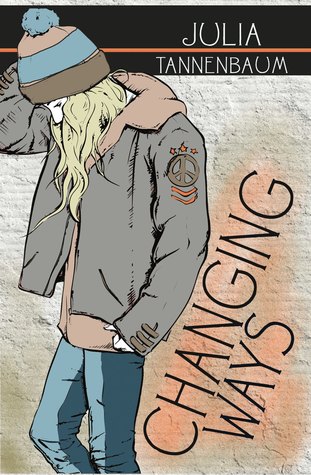 Recommended For: Anybody who wants to take a gut-punch to the feels (in a good way).

TW: This book contains details of self harm, anorexia and other mental health issues, psychiatric wards and hospitals.

For Grace Edwards, life is a bit of an emotional storm. Her father left after her mother had an affair. That, combined with the usual high school horrors would make anyone miserable. But it’s not all bad. Her dream of playing varsity soccer has just come true, and things are starting to look up. Then it all falls apart.

Grace finds herself hauled off to a psychiatric ward and gets hit with a scary diagnosis. Anorexia.

Changing Ways follows Grace through the early stages of her battle with her mental health demons.

I’ll start this section with a warning. I had to stop reading after a few chapters as I was in a bad mental health place myself, and if I’m honest, this book cut pretty close to the bone. Having now completed the book, I’m really glad I waited until I felt better. The content of this book is obviously emotionally complex and if you’ve been through something similar, can be difficult, even triggering to read. But it’s worth it, when you’re in a better head space.

My first impressions of this book were primarily curiosity. This book is set in the US, the land of private health care, and I’m in the UK where we have the NHS. I was really amazed at the difference in mental health provision between the two countries. I even took to twitter to ask for confirmation that this as an accurate representation of how things worked over there. Apparently it is! For those of you who are interested, I’ve been in a psychiatric ward twice in my life for various reasons, and it took an incredible amount of effort and problems to get there. Grace goes from being caught self-harming to a psychiatric facility in a matter of hours, which is apparently standard practice. It was quite the culture shock, but as it turns out this disconnect in experience really opened up the rest of the book for me.

Since Grace is whisked off immediately for observation, she really doesn’t want to be in the facility. She doesn’t see the point and she resists at every turn. The idea of the controlled environment and treatment plans makes her feel infantlized and robbed of her independence. Her diagnosis makes her feel broken, and it’s heartbreaking, but also infuriating because from the outside you can see how damaging it is. From my point of view, it was a really insightful look at how mental illness affects those around us which is so difficult to consider when you’re in the throws of your own crisis.

Eventually Grace is moved on to an outpatient program, and it would have been easy at this point, to want Grace to just get better and stay that way, especially considering how terrified Grace is about being forced back into hospital. But she doesn’t. As Tannenbaum so rightly suggests, recovery takes time, a lot of time, and you don’t just leave the hospital feeling fine. Grace finds herself in a program for people with eating disorders, and her struggles increase when she start comparing herself to other, thinner patients.

Throughout the book, Grace’s ability to cope and follow her treatment plan fluctuates. Sometimes she struggles, other times it’s a little easier. Grace’s recovery isn’t just a steady climb back to normal, and actually at the end of the book (If you want to avoid the spoiler, skip the rest of this paragraph) Grace finds herself back in hospital over Christmas, her worst fears realised, and obviously, she hates it. It sounds like a miserable ending, but actually it’s beautiful.

My favourite part of this book, I think, comes towards the end, when Grace is having one of her better periods, and she is sitting round the table waiting for another girl to finish her small meal for over an hour. This is something Grace has struggled with herself throughout the book, but she is infuriated. She wants to grab the girl by her shoulders and shake her back to sense. It’s a beautiful moment, because this was how I’d been feeling for most of the book, and Grace has the clarity of mind to notice that this is something she has found difficult.

“I wanted to shake her bony shoulders and exclaim, “Just eat already! Why can’t you just eat!?”
But I didn’t. Instead, I played with the new admission bracelet around my wrist and reminded myself that not too long ago, I was her; petrified of every bite, every calorie that entered my body.”

It was a wonderful moment, because this is such a difficult thing to come to terms with, and it made me hopeful that this knowledge would fortify Grace in her difficult periods.

Changing Ways is a story of complex and difficult concepts, written in a way that is incredibly easy to read. It is emotionally draining at times, and beautiful throughout. I love it when I read something that makes me feel like the author understands a bit of my world, and that is exactly how I felt reading this book. I’m so glad I read it.