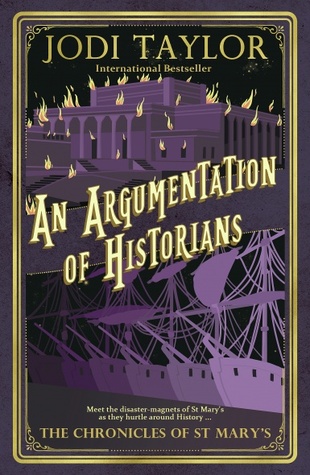 Did you read my “TL;DR”? How was I not gonna read it! Seriously though, I love historical fiction, I love time travel and sci-fi…it was just an obvious move for me.

Also it was in the “A Book Published This Year” category of my reading challenge. One thing I should mention at this point is that this book is part of a series and I wish I had started at the beginning.

An Argumentation of Historians is the 9th book in the series The Chronicles of St. Mary’s. Unfortunately I haven’t actually read the rest of the series, so I can’t give a great deal of overview but I’ll do my best.

Historian Max works at St Mary’s, travelling through time in order to document as much of history as possible. After the unexpected appearance of an illegal time traveller during a visit to Tudor England, Max persuades her coworkers to lay a trap to catch the villainous Clive Ronan (who I have to assume is well established as a nemesis in the previous books).

Unfortunately, the trap fails and Max finds herself stuck with no hope of rescue in the year 1399. Despite being stuck in an unfamiliar time, fortune smiles upon Max by dumping her at St Mary’s…or at least, the St Mary’s of 650 years ago. The story follows Max and her attempts to survive in a harsh new environment, and hope for a rescue that might never come…

The premise is perhaps the part I like the most about this book. As I said above, I love time travel and historical fiction, so the combination of the two was never going to be a hugely difficult sell (although it wouldn’t be the first book I’ve read with this premise that I completely hated).

The story itself is fun, the character of Max is entertaining, and the story is written as if Max was telling it to you in person one evening round a camp fire. I personally am I big fan of informal writing, however this isn’t for everyone so be warned.

There were a lot of references to the previous books in the series during this book. Something about different worlds, or possibly different realities; more time travel; an Arch Nemesis and also a whole host of characters who got little interesting teaser lines which would make sense if you had read the rest but made little sense to me…but I enjoyed those because it still fleshed the world out a bit and it made me want to know more about the St Mary’s setting.

It seems a little odd to say this about the final book in a series I haven’t actually read yet, but it left me wanting more. I want to read both the next book, whenever that comes out, and all the previous ones too. The story references the previous books quite a lot, which is a bit of a pain if you haven’t read them, but not so much that it becomes unreadable. You certainly could read this book as a standalone, but unless it turns out that the other books are terrible I wouldn’t necessarily recommend doing so.

There was nothing about the story I disliked – apart from the fact that I didn’t know who anybody was or what the setting was, but that was entirely my fault for starting at the end of the series.

However, I’ve rated this book 4 buttons out of 5, and the reason for this is presumably more the fault of the publishers than the author, but you never know.

Specifically, this book could have done with another run through by a proof reader (assuming it actually had one) and another look by an editor. The first thing that struck me was that the text was slightly offset on the page – presumably intended to compensate for the binding, but it was too much and it looked really strange. I got used to it, but it really bugged me when I started reading. That in-and-of-itself wouldn’t have lost the book any marks, but then came the spelling and wording errors.

I get it, spelling errors happen. Sometimes you just miss things – I’m sure there are spelling errors on this site! That said, I’m neither a profession author, nor a proof reader, I’m just some mug on the internet with nothing better to do. I can take the odd error here and there, in fact I wasn’t even going to mention it originally, but by the third time I’d seen the word “off” spelt “of” (and this was far from the only problem) it had annoyed me so much I couldn’t not say something.

In addition there was a phrase to the effect of “There is no hard evidence for a sixth sense” which massively irritated me, since I would have thought most people by now where aware the the ‘5 senses’ thing we were taught as children is bunk. There were also a few occasions where it felt like the author had rewritten a sentence, but failed to properly delete the previous attempt and ended up with a garbled mess – a mess which apparently nobody at the publishers caught.

Having said that, I realise these complaints are – despite taking up most of the review space – fairly minor on their own. They just really bugged me. Hence the lost Button in the rating. It’s not something that would stop me reading the series or recommending it to others.

When all is said and done, I really enjoyed this book and I intend to read this rest of the series, copy errors be damned.

I would recommend this for historical fiction fans who like a bit of science fiction (because if you hate sci-fi, you probably won’t enjoy reading this much). Just remember to be warned about the writing style – it’s not for everyone!

Please note: I am in no way affiliated with the author or publishers. I bought this book with my own money for my own reasons. The opinions contained within are my own and have not been influenced by any external entity!