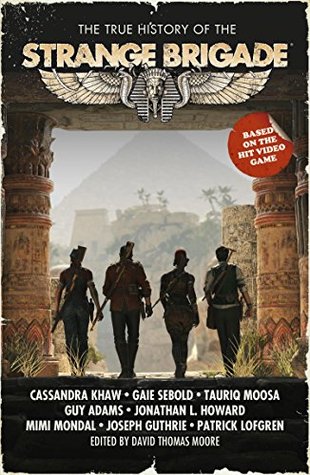 Recommended For: People who have bought, or intend to by the game. People who like short adventure stories.

This book is a short story collection about the Strange Brigade and how its various members came to join it. The Strange Brigade is – if I’ve understood correctly – a secret branch of the British Empire that fights demons and investigates the paranormal.

Overall, I quite like this book. More often than not I found myself wishing the stories were longer, sometimes wishing I could have a whole book dedicated to one character – the stories of Anjali (Peccavi, Or If Thy Father by Mimi Mondal) and Nalangu (Nalangu’s Trials by Gaie Sebold) spring to mind.

Since this is a short story collection, I will try and briefly give my thoughts on each story.

Was Jerusalem Builded Here (Cassandra Khaw) – this may be my least favourite reading experience ever, and I am including the time I dropped a book in the bath. The story jumped all over the place, and I just barely finished it with an understanding of what the plot was. It also included some seriously weird writing…for example:

“…hair the hue of menstrual tissue…” and “Agatha snapped, quick as a crime”.

The first is just gross and the second doesn’t make any sense at all, and these are not the only examples to be found.

If I had to sum up this story using a quote from the story itself, it would be this:

“You’re still not making any sense. Gracie ventured closer, feeling out of her depth. “What are you talking about?”

Ripples in a Polluted Pool (Johnathon L. Howard) – This story follows Captain Fairburne from an ambush in Marseille to an outbreak of pacifism in India. It’s actually a shame this one was a short story. The first part was alright, and I lost track of things during the transition from British Army Captain to member of the Strange Brigade in India, but the second half was great and deserved to be told properly.

The Professor’s Dilemma (Tauriq Moosa) – This story has a hint of Indiana Jones about it, and I love it. A professor is all set up to go on an archaeological dig when his father goes missing and he is attacked by a vicious beast! This one was well written and definitely left me wanting more.

Nalangu’s Trials (Gaie Sebold) – This story follows Nalangu, a girl who becomes a demon hunter, and sets off on a quest to rescue a child from Leopard people. Some of the writing seemed a bit off to me at times, but the story itself was really good. Definitely wanted to know more.

Where You Bury Things (Guy Adams)  – A man on the run from British law finds himself seeking his fortune in Australia. We learn about his past ask he follows a group of strangers into a mysterious cave. The story started off interesting, and I liked the idea of it, but it sort of lost steam towards the end. It built itself up to be really interesting and then just sort of ended.

Peccavi, Or If Thy Father (Mimi Mondal) – Anjali is cursed – her whole family is cursed, and it’s her fathers fault. She is destined to be killed – her brothers have both just died, and her father is on deaths door. Reading that back I realise how terrible I’ve made this story sound, and I sincerely apologise to the author – but this story is actually my favourite one so far. I would really like to find out what happens to Anjali (and her other not-dead secret brother Mahesh) after this story ended, which I suppose is exactly what this book is supposed to be doing…

The Island of Nightmares (Patrick Lofgren) – Lieutenant-Commander Hachiro Shimizu and his squadron were sent on a mission – to capture a mysterious island and establish a base to help Japan run the Europeans out of Asia. But they’ve been captured by the cannibalistic inhabitants of the island. Just when Hachiro thinks things couldn’t get any worse, he learns that the ruler of the island plans to unleash the terrible monsters that live there on the rest of the world, killing everybody. Hachiro must find a way to stop this from happening. This story was pretty cool. It was well written and an interesting story, although I am left with one considerable query about just how the Bad Guys were supposed to carry  out their plans since you are not supposed to be able to sail out from where their ship is. But maybe I missed something. It also mentioned a cowboy member of the Brigade I have no memory of, which either I’ve forgotten or was never told about, either way I feel like I’m missing out.

Tessie’s Song (Joespeh Guthrie) – Tessie, pilot extraordinaire, is attacked by the undead in a bar, and promptly recruited to the Strange Brigade as a pilot. On her first mission she finds herself struggling to extract the Brigade from an island infested with undead and dinosaurs! This story was the only one that had the main character join the Brigade within the first few pages, it also felt like very little happened. I realise its a short story and you can’t cram too much into it, but in comparison to say, The Island of Nightmares which I had just finished, it just felt sort of hollow. It was fun, don’t get me wrong, was just a bit underwhelming.

I nearly stopped reading this book after the first story – and I’m glad I didn’t because the rest of it was enjoyable. Actually it seems quite odd to me that the first and last stories were the ones I enjoyed least, which is unfortunate, but then very few people enjoy every story in a collection of shorts by different authors.

I get the feeling that reading this book would be a lot better if you had literally any clue about the game it was written to accompany – which I don’t. That said, reading this book has persuaded me to look up the game and see what it’s about so I suppose it did it’s job quite well.

This book lost a few points in my ratings because of how much I disliked the first story, and a bit more because it felt a bit rushed. Please note, I am not saying it felt ‘short’. It’s a book of short stories, they are supposed to be short. What I mean is that many of the stories felt like the authors had a whole book in mind, and then were forced to condense it into a half-hour read, which led to a lot of things that weren’t explored in the way it felt they needed to be. I would have preferred to read a series of short books, or even a collection of slightly longer stories, just so the characters could have been done justice.