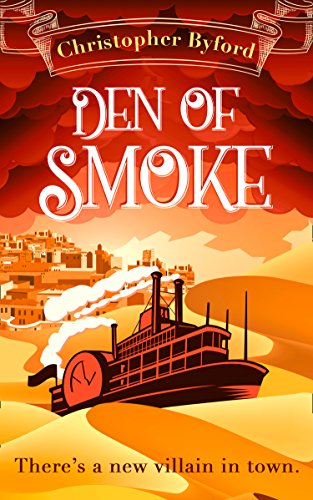 Recommended For: Fans of heists, anti-heroes and adventure.

This book focuses on Jackdaw, a mid-level criminal the Morning Star‘s crew worked with in the previous book, and his gang.

When a man bursts into the gangs hideout brandishing a pistol and demanding money, Jackdaw finds himself a promising candidate for his criminal enterprise – he hires Cole immediately. Cole quickly makes himself a valuable member of the team as they go out committing their various crimes. But the new crime lord, Donovan, demands ever increasing tribute from Jackdaw and his gang, which leads them to attempt the most insane 1-chance-in-a-million heist anybody has ever conceived.

For the first 60% of this book, the Morning Star and it’s crew don’t even get mentioned. This is exactly what I needed after finishing the previous book (for an explanation of why I hate almost the entire cast of the previous book, please see the full review here: Book Review: Den of Stars (Cristopher Byford)). It focuses on the Jackrabbits ad they go about introducing Cole to the world of crime. The remaining 40% also features barely any of the cast of the other two books – so heads up, if you loved the crew, you may miss them in this book.

I, on the other hand, did not miss the other characters. I LOVE, the Jackrabbits. They are great. They spend the entire book committing crimes, but without any of the problems I had with the crew of the Morning Star.

The book is exciting from beginning to end. It’s very action based – there is always something happening, from a bank heists to beatings. I personally think this story is less complicated than Den of Stars which for me is definitely a good thing. The motivations of the characters are simple, their responses make sense and it just makes for a much easier, more engaging read. It made the characters easy to relate to – so when Jack takes a beating, and that dude takes a lot of beatings, you feel sorry for him and want him to get his revenge.

It’s well written and entertaining, and most importantly, fun.

This book could, with minimal alteration, have not had the Morning Star cast in it at all. When I say it focuses on the Jackrabbits, I mean it – it is all about them – and personally I think that’s brilliant. It confirmed my suspicion that I hated Byford’s characters and not his writing, which as it turns out, I really enjoy. This book more than made up for my disappointment with the last one and you should definitely read it.