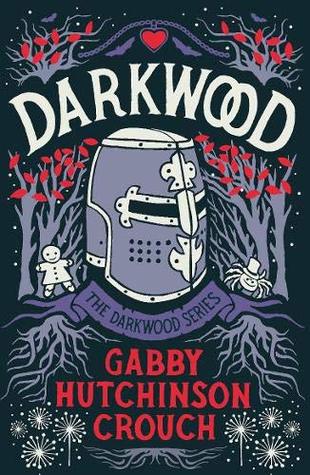 Completely fabulous, can’t wait for the rest of the series. A strong contender for Book of the Month

Recommended For: Fans of fairytales, fantasy and female characters who kick butt!

Darkwood is a sort of fairytale retelling and variety pack. The lead character is Gretel, of Hansel and Gretel fame, driven out of her home by villainous Huntsmen who (wrongly) accuse her of being a witch! Gretel finds herself in the Darkwood, and soon winds up as part of a band of witches, featuring such wonderful characters as The White Knight (Snow White), Jack (of the Beanstalk fame) and my personal favourite, Trevor the Talking Spider. What follows is a hilarious adventure to fight back against the forces of evil!

I flat out adore this book. There are 2 things I didn’t like about it, and I’m gonna start the review with them because then I can gush about how good it was uninterrupted.

OK, where to begin. Let’s start with the setting. I’m a big fan of fairytales and folklore, and combining so many stories into one setting was a real treat for me. Each story has been turned on its head and reimagined, and then blended into something better than the sum of its parts. It’s really clever, well executed and extremely good fun.

And it’s funny! Oh man. I mentioned Trevor the talking spider in the intro and I’m gonna talk about him here. Trevor is *exactly* the type of character I love to read about. He’s small and apparently useless, but he dreams big. He wants to be useful. He wants to be a spy! And every time he gets the chance he does something daft. Like disguises. It’s silly, and playful and I love it.

Now I’m going to return to point 2 of my complaints. Present tense. I don’t like it, it annoys me and I’ve never been able to get over it. Until now. I really love how this book was written. I’m turned around on the use of present tense in writing, which is a big thing for me to admit.

I love this book. I can’t wait for the rest of the series. I suppose the biggest compliment I can give to this book is that it made me want to write the book I’ve been planning for so long. It’s encouraged me to get up and give it a shot!