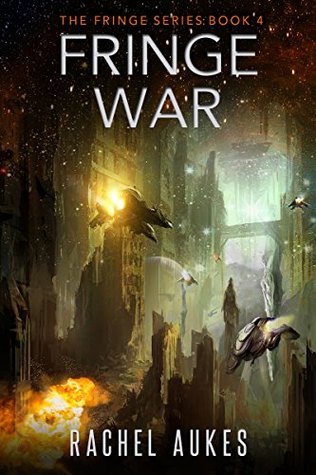 Interesting, but a little overwhelming.

TL;DR – Freedom fighters kick back against the government that oppresses them, war ensues. Full of plotting, politics and spaceships.

Recommended For: Fans of sci-fi

Fringe War is the fourth book in a series I haven’t read. It follows the story of a group of freedom fighters in their struggle to wrestle control and a better life from the hands of a corrupt – and evil – government. It’s your classic space-based underdog story.

I’ve given this book 4 stars, although if I’m honest I feel I should give it three. I’ll explain that first and then move on to the book itself. I personally felt that there were too many characters and names being thrown about it this book – I really, really struggled to keep track of who was who, and even now I could only name two characters, and I only really know who one of them is. For this reason, I would have rated this book a three – however, I am erring on the side of caution, as this could just be my own issue rather than a genuine problem with the book so I would encourage you to make up your own mind on that front.

The story itself – or at least, the bits I could keep track of – were very interesting. I enjoyed reading about the political landscape of The Collective, and the unpleasant motivations of Heid, who seems to run the parliament. There were a lot of references to things that must have happened earlier in the series that influenced a lot of the decisions made by the characters, and I would definitely consider picking up the rest of the series to learn about them.

I think the story had a good balance of action and political thought, which made for an easy read, aside from the issues addressed above.

This book definitely seems to have the potential to be really enjoyed by someone who can get their head around all the characters. So if that sort of thing isn’t a problem for you, I’d recommend you give it a try.