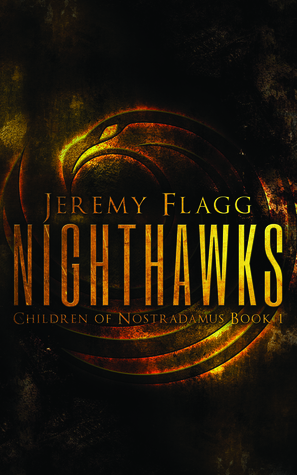 I wanted to enjoy this more than I did.

TL;DR – A book about super-humans, government oppression and revenge. An enjoyable concept I just couldn’t get in to.

In the world of Nighthawks, super-powers exist and are heavily resisted by the American government. Powered humans (or, Children of Nostrodamus) are locked up, killed or forced to live in an uninhabitable wasteland – shunned by society. A powerful psychic made sends out a number of letters before her death, letters that bring together a group of Children who find themselves working together to fight back against their oppressors.

Nighthawks follows a fairly classic formula that I personally really enjoy. Powered humans are oppressed by somebody and spend the rest of the book fighting back. This is exactly my kind of plot, and because of this, I had high hopes for this book which unfortunately weren’t met.

My first issue, which admittedly was the smaller of the two, is that the action sequences, particularly the fight scenes felt a little sterile. I’m not sure if it was a language or a pacing issue, but for whatever reason, I felt distinctly underwhelmed after the various fight scenes.

The bigger issue came from the fact the I really – and I mean really – struggled to follow the story as it moved along. The story uses multiple points of view which I found a little confusing at times given the authors tendency to switch POV and then spend a little while using impersonal pronouns (she/he) instead of names. In addition, I struggled to follow the plot from one point to another. At times it seemed to leap ahead – the final section of the book, where the characters invade a prison seemed to come out of nowhere and left me wondering if I’d skipped several chapters by accident. If I’m honest, I would struggle to give more than an extremely broad-strokes recap of the plot of this book.

Oh yeah, and one final thing. This book also contained the phrase “Conthan stood up and Dwayne gave him an awkward male-on-male hug.” A sentence I hate so much I almost knocked a Button off the rating for.

That said, I did enjoy elements of the book. I particularly enjoyed the way the Children’s powers work. They are each unique, and range from the mundane to the devastating. I liked that the powers had a downside to them, that prevented their over-use, the characters had to be careful using their powers or they would lose control. It was an interesting mechanic. I also enjoyed learning about the way society treats the Children of Nostradamus, and the interplay between government thugs and civil rights groups, something I would like to see explored further.

I’m not sure, personally, if I would continue reading the series. My reason for this is that I’m not sure I could deal with the writing style, rather than the content itself. As such, you might find the writing suits you perfectly and enjoy this book a great deal, so I suppose you should give it a shot and find out.