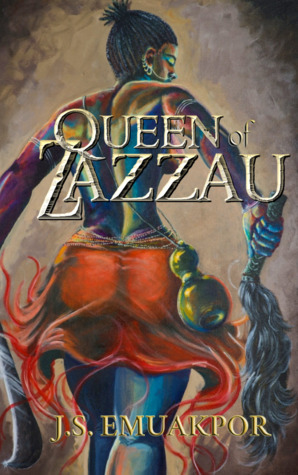 Amina is a princess, heir to the throne of Zazzau and a destiny of war and bloodshed. Amina must prove herself as a warrior and lead Zazzau against hordes of foreign enemies and strange magic. But the god of war has his sights set on Amina, and ruling the nation soon proves to be far more complicated than Amina could have possibly imagined.

Queen of Zazzau follows Amina from her beginnings as the heir apparent, through war and love and impossible bargains. The book takes place over some 80 years, during which Amina becomes a strong military leader, a Queen and the wife of a god. It is full to the brim with battles and magic, gods and romance.

I put off reading this book for a while as it is pretty long, clocking in at 510 pages – and what a selection of pages they are!

My favourite thing about this book is its lead character, Amina. Amina is a wonderful example of well-rounded, strong female lead. She’s powerful, clever, loving, dedicated – she is brilliant. We get to explore so many facets of Amina’s character as the story progresses, from romantic interests, battle tactics, diplomacy…even an unexpected pregnancy. Life throws so much at Amina, and she doesn’t take it lying down, but at the same time, she has this fragile side that feels so real – she struggles to keep going at times, allowing fear and panic to take hold of her. Amina is such a great character for so many reasons, and I’m super pleased to have read her story.

Another thing I loved was the way religion is explored in this book. Strictly speaking, the Zazzauwa are Muslim, but for many, if not most of them the old religion still exists – a host of other gods hold some sway over the workings of the world and I found it really interesting to see how the two quite disparate set of beliefs gelled together into a functioning belief system.

My only complaint about this book was the ending. Now, I need to say before I go further, that I did like the ending – I’m just not sure I’m comfortable with it. Feel free to skip this paragraph as it does contain spoilers and isn’t hugely important.

So an old prophecy has linked Amina and the god of war for years, and when he first appears, Amina wants no part of it. She’s quite happy as she is, she is already in love with someone else but the god of war insists that she will be his eventually. This turns out to be true, but when she finally does go to him, she offers herself in exchange for his influence over a battle that will decide the fate of her kingdom and everyone in it. So Amina becomes his wife, and then the god drops the bombshell that she will now feel intense sexual desire, which he will only satisfy when he feels like it. She is free to sleep with other men, but they MUST die afterwards. I think we can all agree this is beyond creepy and straight up abusive – but that’s gods for you, those guys are jerks. Anyway, because of this, Amina is prevented from properly experiencing love for her entire life – which, incidentally, is spent eternally young, so for 80 years she can’t allow herself to love another man, instead of taking a number of ‘temporary husbands’ and killing them, or periodically having sex with the god of war. Which brings us to the end. Turns out, after all this, she completely loves the god of war and they ride off into the sunset together.

OK spoilers over, on to my point. As I’ve said in other reviews, I’m autistic – I have trouble understanding how other peoples minds work. But to me, the end doesn’t make sense. I’m not sure what I would have wanted in its place, and I’m not begrudging the bitter-sweet ending, but still, it doesn’t sit quite right with me. But that could just be my weird interpretation – don’t let it prevent you reading the book and making up your own mind.

This book is an epic tale with so much to love about it. I’m really pleased I read it and will definitely be keeping my eyes peeled for anything J.S. Emuakpor might release in the future.

One thought on “Queen of Zazzau (J.S. Emuakpor)”