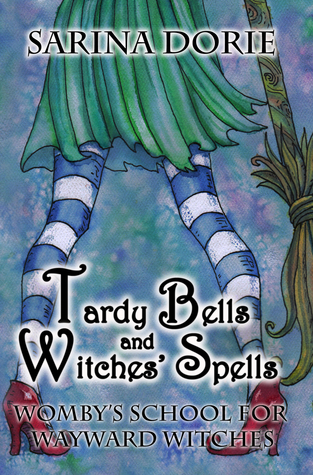 Recommended For: Fans of magical romance

Tardy Bells is the tragic story of a teenage nerd who wants to be a witch. Clarissa Lawrence is a geek. She loves Star Trek and Doctor Who and Lord of the Rings, and she loves magic. But her wish for magic turns sour when, after an incident at the Oregon Country Fair, where Clarissa’s sister becomes convinced she will be murdered by Clarissa before her 18th birthday.

What follows is a tale of magical discovery and teenage romance.

I really enjoyed this book, it was another one of those can’t-put-it-down reads where, had I not had other things to do, I would have read it all in one sitting. I hate how much I relate to Clarissa, the 14 year old girl inside me was crying out the whole way through screaming “Oh my god YEEEEESS!” She is a nerdy little girl who doesn’t fit in, struggles at school and has a group of weird friends. She is a total underdog and you can’t not root for her. Her sister is the preppy, beautiful popular cheerleader. Clarissa’s life reads like a story book, which for a character so heavily influenced by fiction seems highly appropriate.

It is established that Clarissa is geeky by namedropping all the various geeky things she enjoys, from Star Wars to My Little Pony. I understand why it was done, it was just super irritating.

Also, I hate Clarissa’s mother. I personally feel that the events of this story, much like the events in Disney’s Frozen, could have been easily avoided if the child’s parents weren’t total morons. Clarissa’s mother goes out of her way to make Clarissa think magic doesn’t exist, allegedly for her own protection. To whit, she has drugged her daughter since birth, and after an argument, literally burned every magic related item Clarissa owned, which was about 90% of her stuff. When Clarissa’s sister gets abducted at the Country Fair and comes home raving about how Clarissa is going to murder her, instead of sending the sister to a psychiatrist or something, the whole thing seems to be put on Clarissa. Her mum hates Derrick because she senses magic in him, and worries Clarissa’s magic will surface by association. Now to her mums credit, that is exactly what happened, but realistically if she had done the sensible thing and talked to her daughter about the situation like a normal person, the terrible things that happen throughout the book might have been avoided. Infuriating, but good reading.

The story is paced well and reads nicely. The writing style is informal, I suppose very much in the way you would expect a well-read 14 year old to recount things. It makes for very easy reading. I love Clarissa and Derick as characters, I see so much of myself in both of them, which was really nice. I just want them to be happy! I’m so pathetic!

This really is a book for the outcast weirdos out there. This book is a fun little read, that I couldn’t put down. It’s a little weirdly written at times, and the constant name dropping bugged me, but I’m glad I read it and will definitely be reading the rest of the series (I have the next 2 downloaded already!)