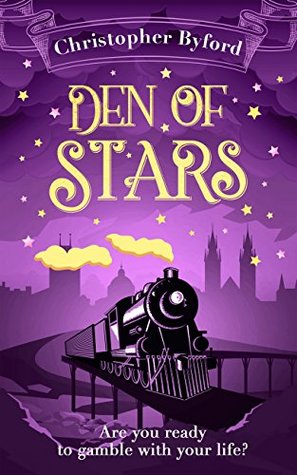 Recommended For: I guess adventure fans.

The Gambler’s Den has been reduced to a pile of smoking wreckage, the (now homeless) showgirls have taken to running their own restaurant, and the alleged deaths of Franco and Misu are mourned far and wide. But Franco won’t stay in hiding for ever – instead he has commissioned a new train, the Morning Star to carry on the show!

Wilheim Fort, the crime lord, has escaped from Jail and kidnaps Franco, and blackmails Misu – If she uses the Morning Star to deliver shipments of Red Root, he will return Franco in one piece. Misu does everything she can to get Franco back with unexpected results.

WARNING. Under absolutely no circumstances should you read this book if you find descriptions or situations of psychological or physical abuse to be detrimental to your health. The descriptions are not overly explicit, but they do lead to a mental atmosphere that could be potentially upsetting and triggering.

The first thing you should know about this book is that the exciting climax rescue is really enjoyable, exciting and great reading. There’s heroism, daring raids on a crime lords stronghold and a whole host of kick-ass female characters. I really like that part of the book. The reason I’m starting by telling you about the ending is because the rest of what I have to say isn’t that favourable, and I don’t want you to get the impression that I didn’t like this book at all or that it isn’t worth reading. It almost certainly IS worth reading, it just wasn’t my cup of tea. Now I’ll explain why.

The tagline for my review of the previous book in the series (Kwik Review: Den of Shadows (Christopher Byford)) was this:

There is a special place in hell for Franco de Monaire, I hope he finds it.

Franco was a jerk. Or at least, I thought he was. He gave Misu all kinds of grief for making a bad choice, a choice she was compelled to make by someone who had spent literally years abusing her and a host of other women. I make no bones about it, I can’t stand Franco.

I could probably adapt that tagline for use in this review, if I changed the words Franco de Monaire to basically every character. Especially Misu. I have to believe this wasn’t done on purpose – I don’t know why an author would want you to hate all of their characters intentionally. I’m not going to go through why I dislike basically all the characters (apart from Wyld), so I’m just going to complain about Franco and Misu for a while.

Misu – for reasons I cannot begin to imagine – finds herself under the thumb of Wilheim, her long time abuser. Franco has been kidnapped and in order to have him returned safely, Misu agrees to haul Red Root (or ‘super heroin’) all over the place. She does this without telling any of the other people on board, which, as one of the showgirls is quick to point out, turns every single last one of them into accomplices to the crime, because who is going to believe that nobody on board knew that they were transporting AN ENTIRE TRAIN CAR FULL OF DRUGS!? What’s more is we get a sort of explanation in the form of back story, where we learn that in order to survive under Wilheim in the first place, Misu ingratiated herself to the crime boss and was put in charge of a great deal of abuse and slavery of ‘weaker’ girls. I have such mixed feelings about this. On the one hand, I absolutely understand the need to survive any way you can in that sort of situation, which is why I was still on Misu’s side during this back story, despite what seemed like a deliberate attempt to make me hate her guts. I get that it’s hard to trust people after that sort of thing too, but given that one of the main points of the previous book was the Misu did something terrible because of her past abuse, and didn’t bother to actually tell anyone – an act which causes the den to be blown up, the girls to go on the run, Franco and Misu to be considered legally dead and any number of other problems, I just cannot understand why she wouldn’t have mentioned it, or why she would go out of her way to cover the whole thing up. This serious character flaw is bought up constantly, with basically everyone hating Misu, and eventually you have little choice but to agree.

Also, Misu and Franco let the entire crew of the Gambler’s Den believe they were dead for two years – which is bad enough – but then instead of breaking the news gently, they rolled into the girls new place of business and just went Guess whose not dead! The crew are understandably livid. Jaqcues has become an alcoholic, drug addled vagrant – his life has been completely and utterly OBLITERATED trying to keep the promise he made to France, that he would keep the girls safe. They just appear out of the blue and their excuse was a vague notion of ‘safety’ as if Wilheim wasn’t the sort of person to punish associates of his enemies, regardless of whether that enemy was alive or dead.

Misu treats everybody like absolute scum the whole time. Before they discover the drug dealing, she is rude to them – she takes everything out on the new driver, who is basically a saint for taking it without some sort of outburst. But the worst of it is the attitude she – and Franco – have created on the trains. Somewhere in the middle of this book, a new character, Elizabeth, is having real trouble dealing with the fact that the defending the train can, and does, mean killing people. This wasn’t what she signed up for. Then another character starts talking about the expectations of the employees on the train. She shows Elizabeth a bullet wound received in the previous book (I think). She tells Elizabeth how fortunate she was to be on board the train, how Franco and Misu had bestowed some sort of great kindness on her and that people on the train has to ‘pay their way’ or ‘earn their place’ or some other similar expression. Pay it with blood. Now, Elizabeth and all the other girls are employed to work on this train. They all have talents that make them a valuable part of the staff. Elizabeth is a beautiful singer and they use her talents in the show, a show that earns Franco his money. She owes Franco nothing. She is paid to be there because of her skill set. Without people like her, the show stops and Franco and Misu would find themselves penniless and alone. But apparently this attitude that the girls on the train are so fortunate to be their – because what else would they do – is an attitude actively fostered on the train and re-enforced by the management. What make it worse is that this kind of rhetoric, that these girls don’t know how lucky they are to be taken from hardship and put to good use, is EXACTLY THE SAME as the rhetoric used by Wilheim to justify his slavery ring. Plus, Elizabeth notices that something is wrong, that it’s all secretive her concerns are dismissed and she is ostracised for daring to question authority – it is seen as a behaviour to be stamped out.

Finally (and I promise I will move on from this as soon as this paragraph is over), while planning the rescue of Franco, Misu is negotiating a deal with a mid-level member of Wilheim’s criminal enterprise. Seeing he has the upper hand, this criminal, Jackdaw, declares that he will only help if Misu agrees that at ANY POINT IN THE FUTURE he can call on Misu (and the rest of the staff) to do him a favour. Anything at all in the entire world, they HAVE TO DO and they cannot under any circumstances refuse. Misu, still recovering from a literal mutiny due to the fact that she made MASSIVE, LIFE-ALTERING, DANGEROUS decisions for the entire staff of the Morning Star, not to mention the aftermath of the previous book which was also made worse by her making bad decisions and not telling anybody, instantly agrees to this complete insane request, without speaking to any of the crew and asking what they think. It is even attempted to be justified as a reasonable action. As a narrative device, I can see understand what the idea behind this move was, it set up the sequel, but in terms of the characters? Misu will be insanely lucky if the crew doesn’t utterly destroy her in the most horrific fashion imaginable.

This book feels more ‘adult’ than the previous ones. It’s more sexual, the bad language is not excessively used but from what I remember there is more and worse language used than in the previous installment, and the whole book is based around drug dealing, one of the characters actually being a drug addict. This was not a welcome change for me – I liked the tone of the last book, which felt more like a classic adventure with some grit thrown in at strategic times, where as this book just felt gritty. I’m not so big on grit.

Also, this book just made me feel uncomfortable nearly the whole way through. I don’t understand the characters motivations, they all seem to hate each other and the author seems to want me to hate them! I couldn’t follow why people were acting how they were – their responses to things didn’t make sense to me at all. Maybe it’s because I’m autistic, I’m not great with that sort of thing, and the emotions involved were definitely complex, so maybe I just missed something other people would find obvious, but whatever the reason it just didn’t sit right.

Finally, the whole parallel ‘saviour’ narrative between Franco, Misu (the heroes) and Wilheim (the abusive, slave trading, drug dealing crime boss) just made me feel ill. The girls on that train were brought in to put on a show and from my perspective, abused. The basic story might have been really good but I couldn’t get past the elements of this book that I have mentioned. To be honest, it made me feel ill.

Just to end this review on a more positive note, because so far it’s been incredibly negative.

I really struggled to rate this book, and I’m still not convinced I’ve got it right. The parts I hated made me want to commit this book to the ‘do not read’ section and be done with it – but that seemed unfair. I finished the book in a few days, and the parts I liked, I really enjoyed, these are not the hallmarks of a really bad book. So I have given it 2 buttons in recognition of that parts I did like.

In addition, I have the next book on my kindle and I will be starting it in about an hour and a half. So it hasn’t written off the series. I guess what I’m saying is, this book really wasn’t for me, but it might be right up your street. So I don’t know, try it and see.