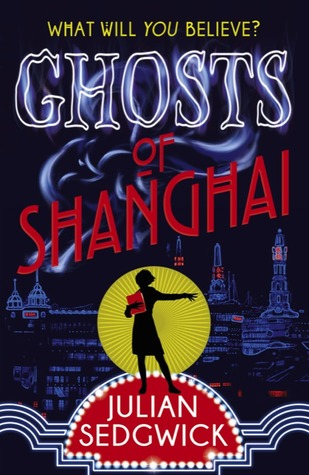 Ruby is my absolute fave. I could read about her exploits all day.

TL;DR – Follow our little heroes on a dangerous adventure through the underworld of Shanghai. A really exciting book – I can’t wait to read the other 2.

We’ve had the books sitting around for a while now – my younger sisters have been hounding me to read the series for ages. “You should read Ghosts of Shanghai!” “Have you read it yet?” “Why haven’t you read it?!” “READ IT BEFORE I SET YOU ON FIRE!!” That sort of thing. I was looking for something to read between books of the Maze Runner series (James Dashner) and these happened to be there so I thought I’d finally try it.

Ghosts of Shanghai is set, oddly enough, in Shanghai in the 1920’s. It’s a period of unrest, as tensions are growing between the nationalists, the communists, the evil Green Hand gang, and just about everyone else.

Ruby and her little band of ragtag youngsters have found themselves an old book, teaching them how to perform feats of Taoist magic. They find themselves trapping a fox (of the mystical variety, not the little fluffy red dudes) in an old temple, and then there world turns upside down.

What follows is a tale of mythology, espionage, kidnap, betrayal and heroism.

So first off I adore the main character, Ruby. Ignoring the fact that Ruby is my most favouritest name in the whole of ever, she is just a super cool character. She’s been brought up in Shanghai, by English parents who appear to want nothing to do with China at all. They don’t speak a word of Chinese, they aren’t interested in the local culture – they just keep being English. Ruby, by contrast, throws herself into her situation. She speaks the language, she loves the culture, she’s interested in the religions and mythologies of the country. She does everything she can to appreciate what Shanghai has to offer, and that’s a rare treat. I can’t abide English folks who swan off to other countries and insist everything has to be English.

But it’s not just that – we see Ruby start off timid, as a result of an unfortunate incident which led to the death of her little brother. She often alludes to an earlier self – Shanghai Ruby – who was fearless and ready for anything. As the story progresses, we see this personality start to return, and become something more than it was before. Ruby shows bravery and intelligence, and an open heart and mind.

The other characters are less of a focal point, they are important for the plot but less developed during the course of this book.

The plot is really good too. I enjoy a good mythology story as much as anyone, and one of the books key themes is Taoism (or Daoism if you prefer). I can’t speak for the accuracy of any of the themes, I just know I enjoy reading about them, from the foxes, to the martial-artist hermit who arrives spreading wisdom and working his magic.

The plot is full of twists and turns, and it is fun to read about how these kids are thrown into the scary underworld of Shanghai, and how they adapt to the situation and become little heroes!

I’m at least fairly convinced a handful of the works Sedgwick uses aren’t real words. I’m not talking about the occasional sprinkling of Chinese (of which I understand only a teeny bit), but there are words that are put forward as English and I’m sure they are made up for no apparent reason. It’s not a big complaint, it’s just a bit weird.

I loved this book – I’ve already started the second on the series, Shadow of the Yangtze. I love the character Ruby, I love the setting and the plot – it’s all good. It’s a nice, easy read and very entertaining.

Recommended for anybody who likes adventure and mythology stories.